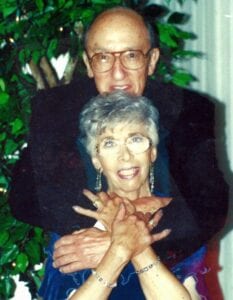 Sandy and Art Mager, moved to Oyster Bay, NY in November 1964 with their four young children. In addition to raising their children, and Art working long hours at his job, they both became actively involved in the broader community. They taught their children – and modeled for them and their friends – that we all have a responsibility to one another and our communities.

Sandy was active with AHRC and FISH (Friends in Serving Humanity). Both Sandy and Art were involved in coaching youth sports and as a team they were instrumental in the creation of the Youth Corner, initially a small house which has grown into the spacious home of the Boys and Girls Club of Oyster Bay-East Norwich. They lived in Oyster Bay for nearly 50 years before moving to the Osborn retirement community in Rye.

This fund was established by the family of Sandy and Art Mager to provide scholarships to graduating seniors at Oyster Bay High School pursuing post­secondary education. Scholarships from the fund will support students that have shown a commitment in word and action to creating a more just and peaceful school, community and world. Students interested in applying for this scholarship should contact Oyster Bay High School.