The Central New York Community Foundation’s LeadSafeCNY initiative has received a $300,000 grant from the Mother Cabrini Health Foundation to replace exterior doors and windows in rental units resided in by low-income individuals.

The EPA reports that chipping lead paint is the leading source of lead poisoning in the United States. Due to friction points from frequent opening and closing, doors and windows are the primary sources of paint chips and dust particles that contain lead.

The renovations will be paid for by nonprofit housing and community development organization Home HeadQuarters at no cost to property owners through a deferred loan. Property owners will be required to retain ownership for a two-year compliance period, enforced through a lien placed on the property. Home HeadQuarters estimates that nearly 60 affordable rental units will have significant lead hazards removed through this effort.

“Home HeadQuarters is pleased to again work with both the CNY Community Foundation and the Mother Cabrini Health Foundation to address some of our community’s most significant lead hazards,” said Home HeadQuarters CEO Kerry Quaqlia. “We all remain steadfast in our determination to ensure safe and healthy housing for our most vulnerable families and this funding and focus will play a large role in reaching those goals.”

The Mother Cabrini Health Foundation, which awards grants to meet the unmet healthcare needs of individuals, families and communities throughout New York State, chose to support LeadSafeCNY for its potential to significantly improve the health and safety of children in Syracuse.

“This program promises to prevent lifelong negative health ramifications of early lead exposure,” said Msgr. Gregory Mustaciuolo, CEO of the Mother Cabrini Health Foundation. “We are pleased to help address such a vital need in the Syracuse community.”

The Community Foundation established LeadSafeCNY in 2018, committing to invest $2 million to fund a variety of approaches to address the region’s high childhood lead poisoning rates. According to the Onondaga County Health Department, more than 10 percent of Syracuse children tested in 2019 were shown to have elevated blood lead levels. That rate is improved by nearly one percent from 2017.

The Community Foundation’s efforts are primarily focused on Syracuse census tracts that were found in 2018 to have the highest blood lead levels in children. Among them is Census Tract 54, where a striking 43 percent of residents live below the poverty line. According to the Onondaga County Health Department, nearly 27 percent of that neighborhood’s children were found to have elevated lead levels in 2018. Surrounding communities show similar data with rates ranging from 20 to 22 percent.

LeadSafeCNY grants distributed in the community to date total nearly $1 million. Outcomes so far have included the replacement of 600 windows and 79 doors and the development of 60 new, safe and affordable rental units. In addition, 41 trainings on the appropriate removal of lead paint have been conducted and thousands of individual contacts have been made to educate residents on the dangers of lead paint exposure. The Community Foundation also committed an additional $500,000 last year to form a loan loss reserve that will help Home HeadQuarters develop new lead-free homes in Syracuse neighborhoods.

In an Action Statement published on its website, the Community Foundation states that it is taking action because “lead poisoning is entirely preventable,” yet it currently hinders children’s ability to enter the classroom ready to learn.

Elevated blood lead levels in young children have been found to cause reduced brain function, impacting the skills needed for academic success, physical activity and social interaction. This can lead to a higher likelihood of ADHD diagnosis, absenteeism, criminal behavior, violence and suicide.

Lead is a toxin that affects the brain, nervous system and multiple organs in the human body. Children under the age of six and pregnant women living in homes that have chipping, flaking and peeling paint are most susceptible. A common source of ingestion is the inhalation of dust particles in the air from the friction of painted surfaces when windows, doors and cabinets are opened and closed.

Syracuse’s aging housing stock is much to blame for the high rates of elevated lead levels in resident children. More than 90 percent of the city’s occupied units were built before lead paint was federally banned from use in 1978.

Those interested in learning more about LeadSafeCNY or viewing local lead data can visit leadsafecny.org. Property owners interested in applying for the Windows & Doors program at Home HeadQuarters can visit www.homehq.org. 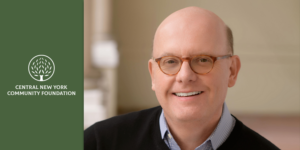 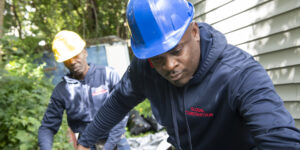