Everyone deserves a chance to meet their fullest potential, but on paper, it seemed as if Al-amin Muhammad wouldn’t get one. Born in South Side Chicago into a hardworking, low-income family, he was surrounded by gang culture from the very beginning. Now, with a newfound love of tending to flowers and people, Muhammad barely recognizes his previous self.

“Looking back at my earlier years makes me feel like I was wearing a mask,” Muhammad said. “I have since discovered interests I never knew I had — like gardening. I feel relief when I look at flowers, particularly roses.”

While incarcerated, Muhammad was in charge of the prison’s community garden. His new passion and skills fostered feelings of hope, happiness and growth and inspired the creation of his Syracuse-based nonprofit, We Rise Above the Streets (Rise Above). The organization provides basic needs and helps low-income individuals build sustainable lives by breaking the cycles of homelessness and poverty that they, including Muhammad, face every day.

Every day at Rise Above looks different. On a Saturday Muhammad hands out lunch and care packages at his Sandwich Saturdays program. The next day he might teach people who were formerly incarcerated how to garden or mentor people with drug or alcohol addictions. He’s also provided more than 9,000 lunches and 1,500 hats and gloves to local children.

Over his first 30 years, Muhammad was in and out of prison, joined a number of gangs, experienced homelessness, was shot twice and pronounced dead once. He once faced a 20-year prison sentence for a drug charge. But finding a job and a place to live after prison would be the hardest hurdle he’d have to overcome.

“It was really difficult transitioning back into life after I was released from prison and I was living on the street,” Muhammad said. “I wanted to go to school and get a job but I didn’t have time because my sole focus was on surviving.” 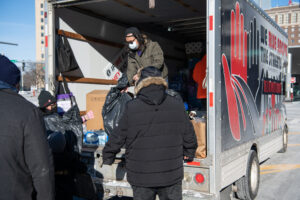 Even in the face of adversity, Muhammad didn’t let his past decisions hold him back. A conversation with a fellow inmate and guidance from two mentors helped him turn his life around. Muhammad was encouraged to “take his mask off” to find his true identity.

He earned his GED while incarcerated and began a path to Islam while later obtaining his associate degree. Those achievements helped open the door to a world where he could fulfill his hopes and dreams while helping others through Rise Above.

“I had people who believed in me and empowered me to see the gifts that I had,” Muhammad said. “Without that support, I may not be where I am today. That’s the kind of support I want to provide for others facing disproportionate obstacles.” 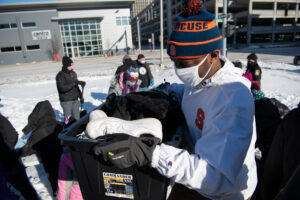 In 2020, he joined The Leadership Class- room (TLC), a Community Foundation initiative, to advance his organization and increase its impact. The free, eight-month intensive training program helps create synergies between nonprofits to enhance program delivery and promote efficient use of limited financial and human resources. Upon completion, each team receives up to $3,500 to implement a community project. Rise Above used its grant to purchase equipment and supplies to help maximize its short- and long-term awareness outreach through its social channels and in-person interactions.

“You don’t often get an opportunity where you can build your own skills and relationships with others at the same time,” he said. “To become a leader that people want to follow, you have to have compassion, accept feedback and continue to push yourself to grow.”

With his boots on the ground in local neighborhoods, Muhammad wants others to know that when you’re out in the field, you can save lives. He said that the people physically engaged in community issues can make the greatest change for people experiencing pain and suffering.

“I see a bright light at the end of the tunnel. I am looking forward to continuing my partnerships with other organizations and saving lives.”

Muhammad continues to challenge himself every day and think of new ways to grow his impact — and his beautiful roses. 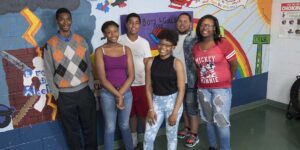