When Mary Ellen Reistrom was approached by a friend about joining the Syracuse Corinthian Club in 2006, she was already aware of its community contributions. Her mother, Carmella, had been involved in the 1960s and spoke fondly of her time spent with the Corinthian ladies. Mary Ellen joined the hospitality and finance committees, revised the bylaws and later became the last Corinthian Club president, serving from 2015 until 2022 when they decided to dissolve the club. As a member and immediate past president, she feels a deep sense of camaraderie and warmth with her fellow “Corinthians,” as she calls them.

In recent years, though, membership dwindled as women’s roles in society changed. Mary Ellen and her Corinthian friends knew that change was inevitable. “I just like to think of it as aging out,” said Lou Anne Colaneri, a member of many years and president in 2009.

Even as recently as 2015, the club hosted large performances with 60 or more guests. However, facing a decreased membership and a global pandemic, the board decided last year to dissolve the club. In its place, it created the Corinthian Club Fund at the Community Foundation to continue the club’s impactful legacy that began with an “army of womanpower.” 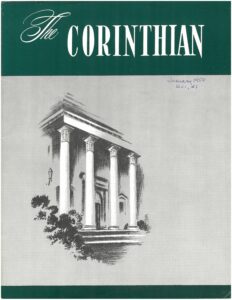 In 1949, a group of determined women decided that Syracuse needed a club just for women. The Century Club was open for men but didn’t accept female members until 1988. A planning committee, led by Genevieve Nelligan, discussed the start of a women’s foundation, which was originally named the Syracuse Women’s Foundation and later became the Corinthian Foundation.

The Corinthian ladies decided to create two separate organizations with two boards of directors: The Corinthian Foundation and the Syracuse Corinthian Club. The name “Corinthian” was significant to them for a variety of reason. Corinth was originally proposed as the first name of Syracuse, but the request was denied since there was already a Corinth just down the road. The exterior columns of the mansion are Corinthian-style architecture. Additionally, 1 Corinthians 13:13 of the Christian Bible concludes by mentioning faith, hope, charity and love which the Corinthian Club held as important qualities in their group. They defined their purpose: To develop and maintain an organization of women to aid in all forms of charitable, educational and welfare work and to stimulate and cultivate the minds and interests of women.

The foundation raised money and purchased the famous Barnes Hiscock Mansion for $45,000 on April 20, 1949. The mansion, built in 1853, has an incredible history starting with the Barnes family whose youngest, Mary Elizabeth (Bessie), married Judge Frank Hiscock, the founder of Hiscock Legal Aid Society. Additionally, Le Moyne College held its first classes there in 1948.

At a time when women were often expected to primarily tend to their children and homes, the Corinthians wanted stimulation and education. “They were progressive, forward-thinking and visionary,” stated Mary Ellen. A club was the acceptable way to achieve their goals. They formed the Corinthian Chorus, offered ballroom dancing, fashion shows, bridge clubs and lectures. They had lovely luncheons and exciting parties. Barbara Watkins, member since 1995 and president along the way, remembered holidays in the mansion, “The club just sparkled at Christmas. It was extraordinary, just extraordinary.” 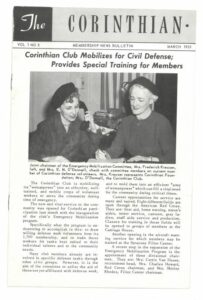 In the early 1950’s between World War II and The Cold War, they answered a deeper call and began training through the Red Cross when the local Office of Civil Defense asked for volunteers to train in first aid, home nursing (Gray Ladies) and aircraft warning teams. The Corinthians formed an “army of womanpower.” They also began Operation Bookshelf, collecting thousands of books and magazines that were donated to hospitals, schools and nursing homes for over 30 years. Later, they started the Wagon Wheel Senior Center, which offered nutrition programs, activities and case management to older adults. The ladies also loved having fundraisers like the Corinth-O-Ree carnival with tents, pony rides and game booths.

Membership started with 631 women and peaked at just over 1500 women in the 1950s. As the times changed, so did the club’s membership numbers. In 2000, the Club had 300 members, in 2015 they had 79. Due to low funding and fewer members, the club made the tough decision in 2009 to donate the mansion to the Barnes Foundation, a historical society which will maintain and preserve the mansion.

The decision to dissolve entirely came in 2021. After 72 years in existence, the Corinthians decided to put the formality of the club aside and to move their remaining assets into a fund at the Community Foundation.

“We helped the Corinthians discern how to move forward with their remaining funds,” stated Tom Griffith, vice president of development. “We will also steward their designated fund for annual amounts to a Le Moyne scholarship and The Women’s Fund of CNY.

Upon hearing that they were an annual recipient of the fund, Kate Michaels, current Women’s Fund chair commented, “The Women’s Fund of CNY is grateful to be a recipient of the Corinthian Club endowment. Through our grantmaking, we’ll make sure to carry on their legacy of giving and supporting women.” Each time that the Corinthian funds are distributed, the check will be accompanied by a note, commemorating the club and their years of good work.

Even without their traditional club, the Corinthian ladies will continue both their friendships and their legacy for many years to come.